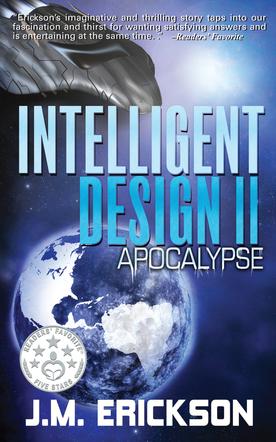 The apocalypse is here…Intelligent Design II: Apocalypse
Hidden planets, preexisting advanced civilizations, coexisting hominid species, and new revelations have all led to the end of days. Whether by twist of fate or by the hands of the Originators, the Jovian planet is about to ignite into a sun. In its wake, Master Architect Janus of Mars will need to warn both Earth and Terra about the profound, cataclysmic effects of such an impossible astronomical anomaly within the Sol System. For wealthy German industrialist and philanthropist Christine Reich and her all-female assault group, Epsilon Team Six, it will mean forming unexpected alliances to save friends and wards. On Terra, former MIT doctoral candidate Andrea Perez will make the discovery of a lifetime—one that will alter the course of her adopted home and prove that there is more to “Hades” than the myth. Apocalypse picks up from where the award-winning Intelligent Design: Revelations leaves off, with more answers that are far darker than the questions.

Forward Reviews' 2015 INDIEFAB Book of the Year Award Finalist
March 7, 2015
Each year, Foreword Reviews shines a light on a select group of indie publishers, university presses, and self-published authors whose work stands out from the crowd.
“The 2015 INDIEFAB finalist selection process is as inspiring as it is rigorous,” said Victoria Sutherland, publisher of Foreword Reviews. “The strength of this list of finalists is further proof that small, independent publishers are taking their rightful place as the new driving force of the entire publishing industry.”

Intelligent Design: Revelationsis a science fiction novella that looks at the origins of our existence as a species, and our place in the universe. The story begins on the planet Mars during its apex where the balance between technology and nature is achieved. All is well until the Gemini planetoids between Mars and Jupiter fall out of their orbits and are set for a collision course. Master Architect Janus and his peers set forth a plan to not only preserve as much of their culture as possible, but the majority set out to find their Creator. Over six million years later on planet Earth, Lieutenant Colonel David Farrell is baffled by a conspiracy that not only cuts through the US's security as if it were non-existent, but also defies the laws of nature and the rules of science. FEMA Director Roberta Josephine Riesman's period of mourning her soul mate's sudden death is cut short by an assignment that requires her to spy on an old friend. Thrust in the middle of a mystery that involves the greatest natural disaster encountered by humans, Riesman discovers that the very core of human existence is about to be challenged. Earth is not prepared. Reluctantly, she is confronted with a choice – walk away to live in France with the memories of her paramour, or take the challenge to make a difference.